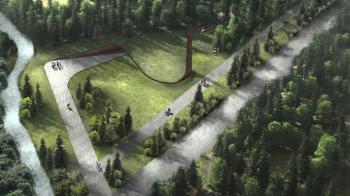 Wikipedia reminds me that the lyric “now I raise my Ebenezer” is inspired by 1 Samuel 7:12 and means “stone of help.” In the Bible passage, the prophet Samuel set up a stone as a monument to mark how God helped the people of Israel.

Intended to be a place of help carved in stone, the Ebenezer Chapel is one of those projects that is elegantly simple in concept and shatteringly disruptive in reality.

Raleigh local Mark Boone has carried a vision of an underground chapel for years, picturing a space for worship that brings people together using existing stone; natural light and ventilation; and the beauty of the North Carolina landscape.

The early church worshipped in catacombs to escape persecution. The Ebenezer Chapel concept is inspired by sacred spaces like the underground church … the Lower Basilica of Saint Francis of Assisi … the Sagrada Familia in Barcelona.

But what does the underground Ebenezer Chapel mean in practical terms?

The short version is that it means a lot of red tape. The longer version: The chapel intersects issues of urbanization, art and faith in a unique way.

For Boone’s vision to become reality, the site off Ebenezer Church Road will have to be re-zoned to accommodate a chapel to hold around 250 people.

Boone sees a structure that is part of the Raleigh community for generations, a space that is literally set in stone and yet offers the openness to evolve as the people do.

Quiet. Community. Endurance. These are all things that we seek in a loud, demanding, isolating world that each day becomes louder and busier, more demanding and isolating.

On the other hand, dozens of neighbors showed up to a community meeting Boone held earlier this month and opposed the plan, expressing concerns about traffic problems and loud noises. Dividing the community would be the opposite of the project goal. But the Ebenezer Chapel has a long way to go, and there's still time for everyone to weigh in.

A chapel carved into the Raleigh landscape. Division and disruption or community and connection? You decide.