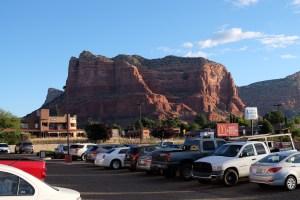 Some people plan for vacations, perhaps most people do.  In our family, it’s more abrupt.  Vacation starts when the TTA recommends that we arrive at the airport.  These are the moments when other people control your life, when even my addiction to technology has no influence.  Take off your belt and shoes.  Put your laptop, your cell phone, and your keys in the tray.  All devices must be in airplane mode.  Fasten your seatbelt. 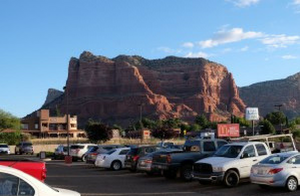 We arrived at night.  We signed away all liability and rented a car.  We drove through mountain roads against pitch black skies to a destination we only expected to exist because we had reservations, in a place we’ve never been.

In the morning, we woke surrounded by mountains, the western cliffs that are unmistakable and unapologetic.

And the phone gets plugged in again.  Already in the first few days we’ve seen the desert floor yield sprawling development at a scale that is simply un-relatable to our comfortable home town in Raleigh.

I’m realizing another addiction – a compulsion for control, or at least of information: that high school expectation to know everything about every band, that assumption that by the time it shows up in publication, I already knew what would happen, and I can tell you my opinion.

In Raleigh, we can almost do it – we can know who the developers are, we can know what conversations they’re having with council, and we can tell you if they’re headed the right direction, and we know what the opposition will say.  But our city is starting to move more quickly.  We can’t make opinions fast enough anymore.

And out here in the western desert, to see development, is to know absolutely nothing, and to control much much less.  Flat desert landscape is covered over with blacktop and low, dense, vernacular housing, new and orderly but mind-bogglingly expansive.  Development is organized by gridded streets and regulated only by water rights.  It feels inconceivably unsustainable, and yet there is so much of it, and so much more room beyond.  The mountaintops stand brazen from the ancient sandy floor, as they’ve always been, dwarfing the largest condominiums, but consistent with them in form. 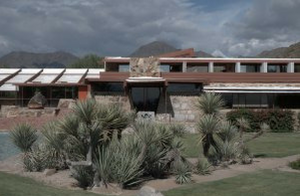 And then we visited Taliesin West.  Seeing Wright’s work around the country is like visiting a relative, an uncle who’s never home.  He’s so familiar, his doors are always open, and yet you can’t figure out where he’s going next or how he makes a living.  He’s still traveling, seeing the world, conducting business and/or preaching his philosophy of the world.  He’s reclusive, but we keep coming to him.

We have the sense that Wright was here first.  He proved that the desert is livable.  He knew that the desert was beautiful, but he had to convince us.  He loved the views, he pointed his campus into the desert, and he framed the hills with architecture.  The tour guide narrated that when the modern electric lines were scheduled to come across his view of the world, he took the debate to the president of the united states.  When he lost that fight, he prepared to move away rather than endure the complication of encroachment.

And that’s the addiction for control that made Wright famous, that gives us comfort in the profession when we experience it ourselves, that we don’t only control what we do, not only what we give away to clients, but we even expect to control what we see.  We know that architecture can invent perspective.

Today, the weather is sublime.  I’m writing from ground level, outside in the shade.  I can see the mountains, an arm’s reach away, and the saguaro, and the palo verde.  And I see power lines, and my view is framed by stuccoed post and beam.